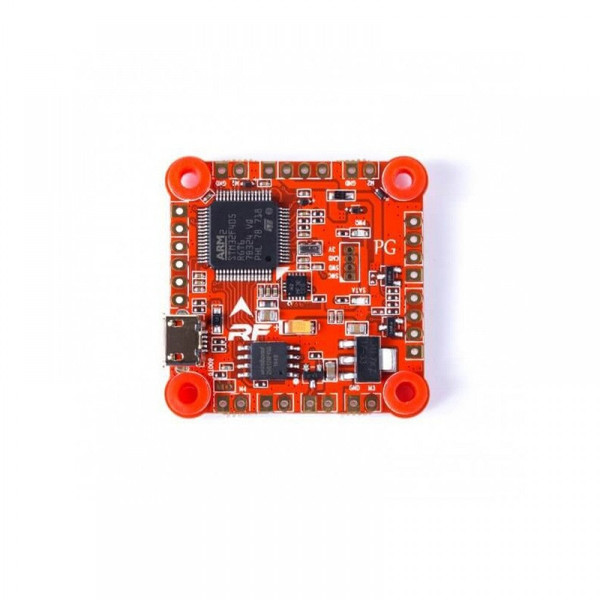 The RaceFlight Revolt flight controller is the most advanced, performance driven, flight controller ever designed. The Revolt uses a powerful F405 MPU, accompanied with the High Speed Invensense 20602 gyro, allows it to take full advantage of RaceFlight Ones efficient code to run at 32KHz for the best Performance possible.

The Revolt presents not only the BEST performance, but also the most STABLE performance due to the amazing vibration rejection technology implemented in RaceFlight. Our filters along with the integrated RaceFlight Gummies, allow your quad to stay in the air no matter what! Damaged propellers caused by that insane gate clip on turn 3? Not a problem. You can still finish the race! Endless days of tuning are now a thing of the past. Our boards come preloaded with software and defaults that should fly amazing for 99% of people.

In addition to the vibration rejection technology, the SSG (Invensense 20602) gives you the highest speeds currently possible with the lowest noise floor and highest sensitivity. The Invensense 20602 gyro has never been used in any flight controller before (except the Revolt) and gives you the fastest response time possible as if the quad can read your mind.

Setting up the Revolt is easy. The solder pin layout is easy to read with motor connections in each corner. Just solder the closest motors and the wizard handles the rest, you can put the Revolt in upside down and backwards just solder to the closest motor pad and the RF1 wizards will handle the rest. . The Millivolt also features DFU free updating and a self-healing and updating bootloader, just in case something does go wrong.

Zadig and other complicated driver configuration tools are a thing of the past with the Revolt’s new driverless installation technology. Tired of messing around with Zadig or DFU to update your software? We were too, that’s why you no longer have to worry about messing around with them. The Revolt also features DFU free updating and a self-healing and updating bootloader, just in case something does go wrong.

Revolters will also get access to RaceFlight’s ticketed tech support which will include step-by-step help with installation, tuning, and anything else that may arise with your Revolt.