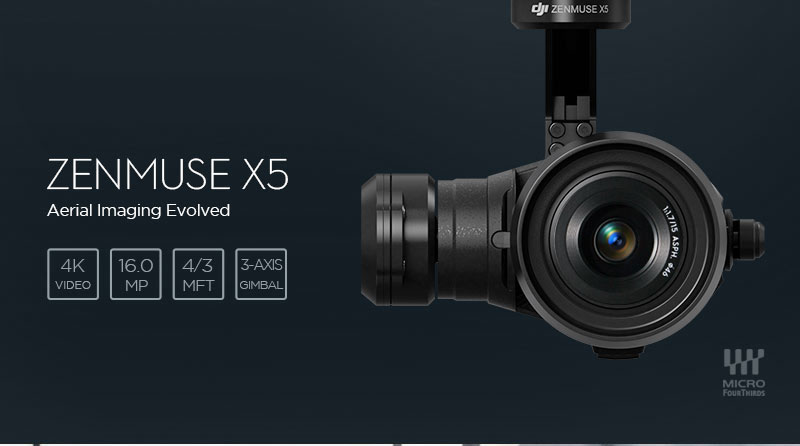 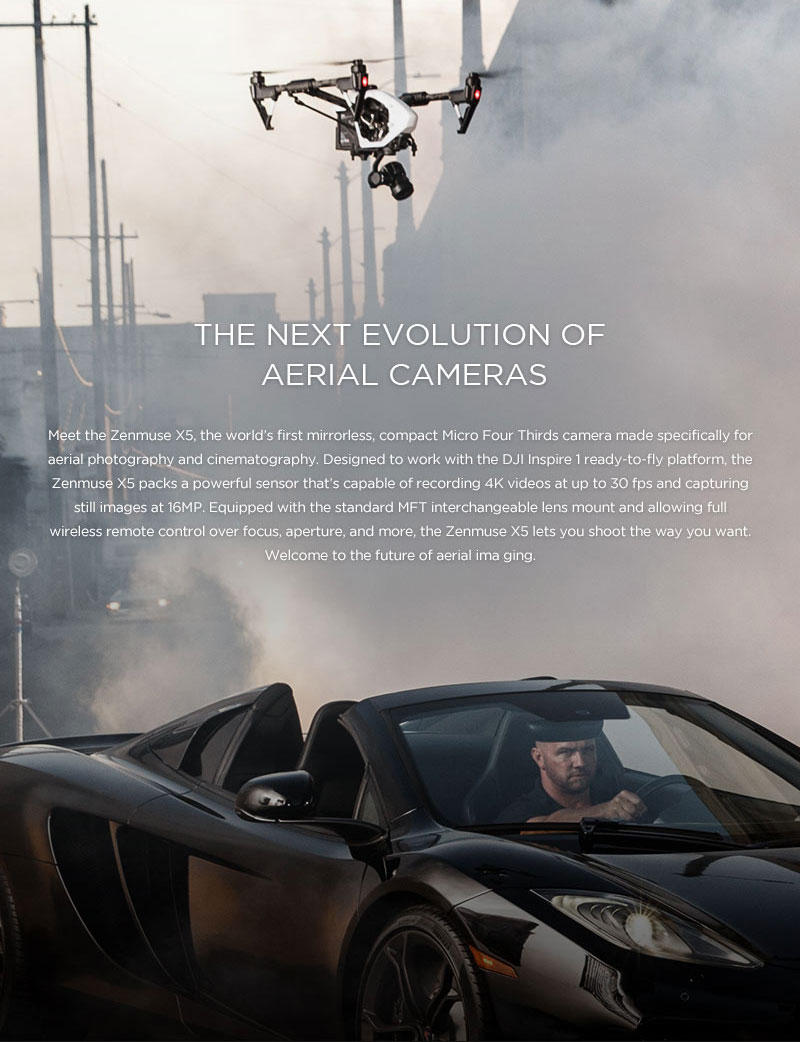 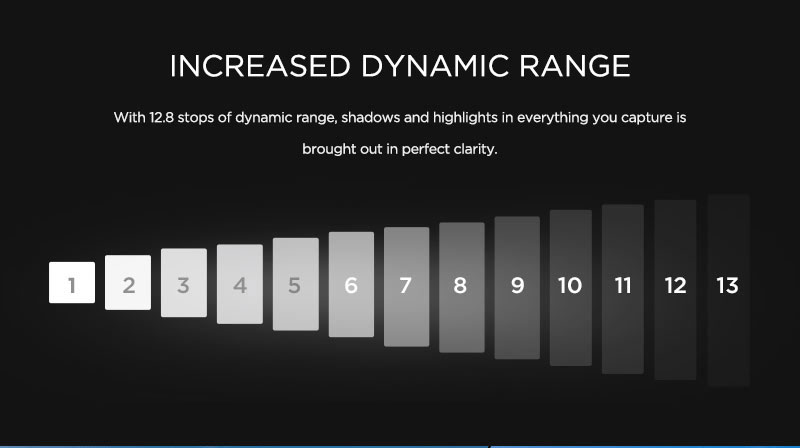 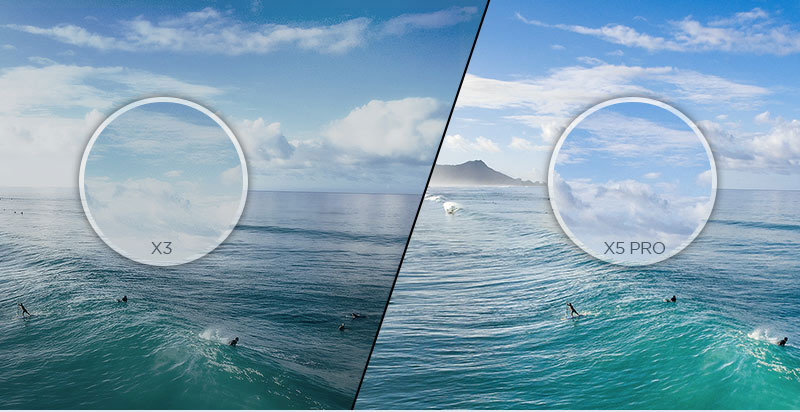 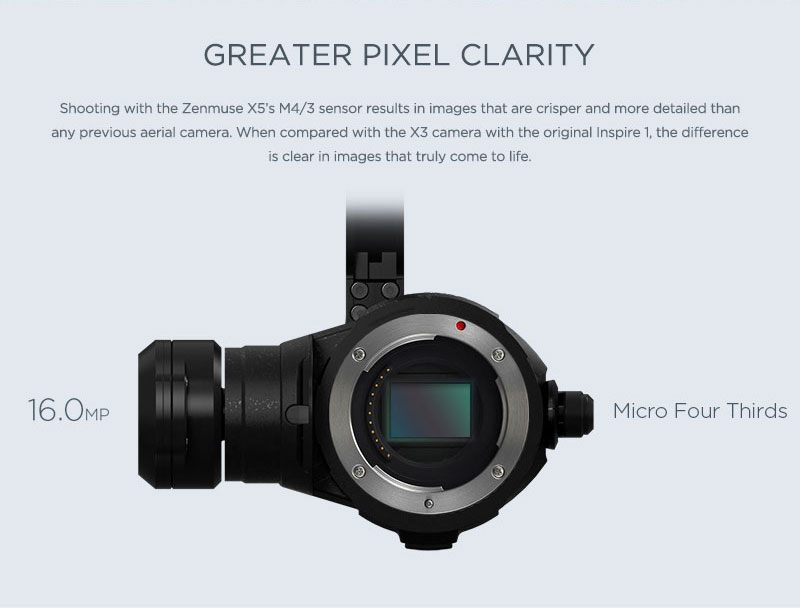 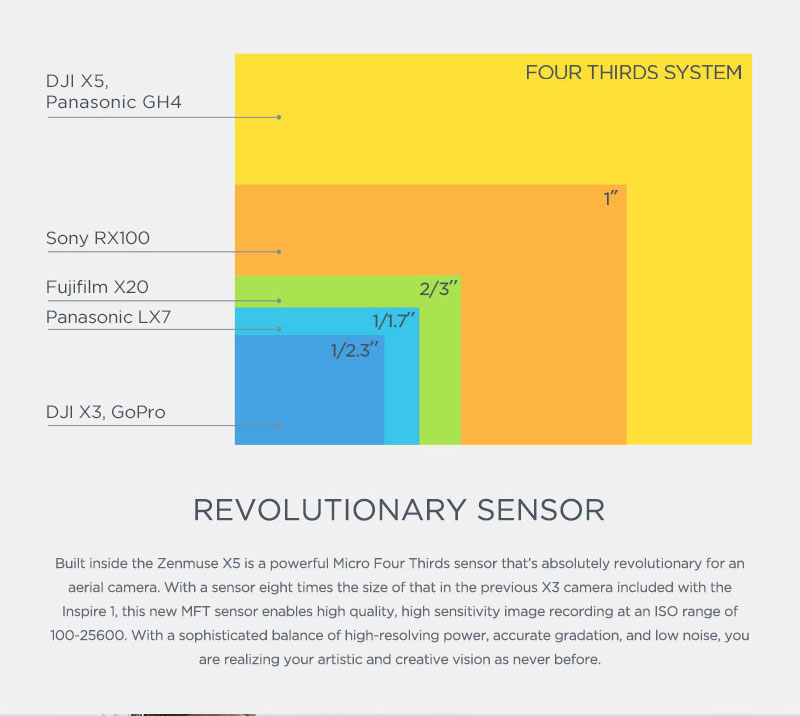 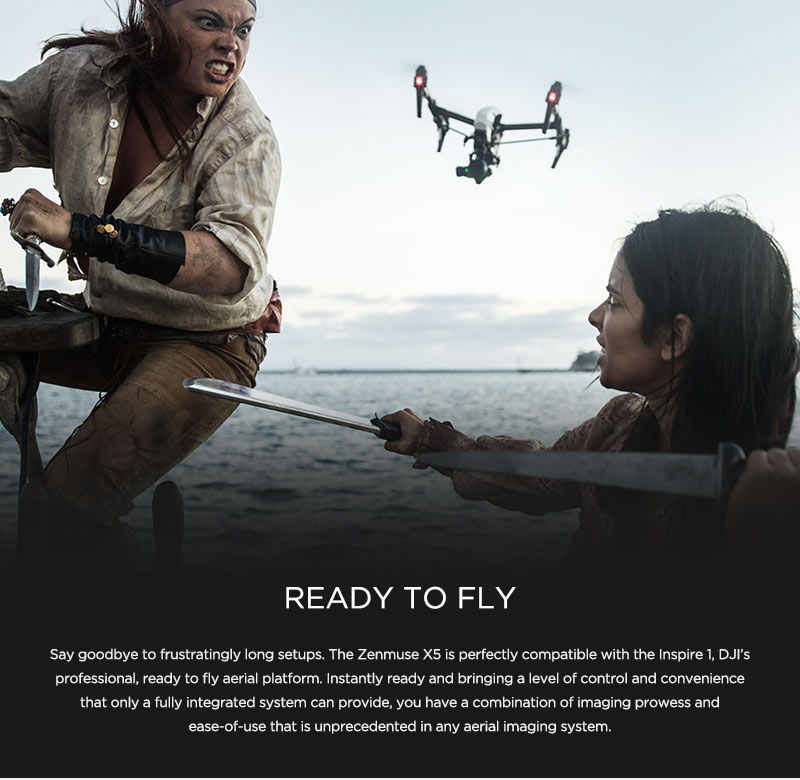 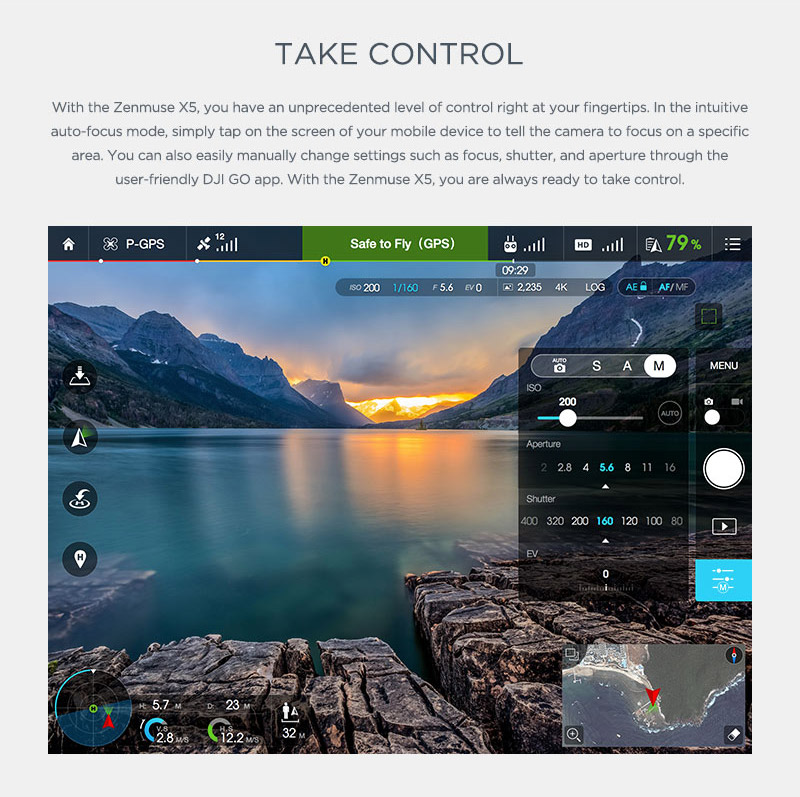 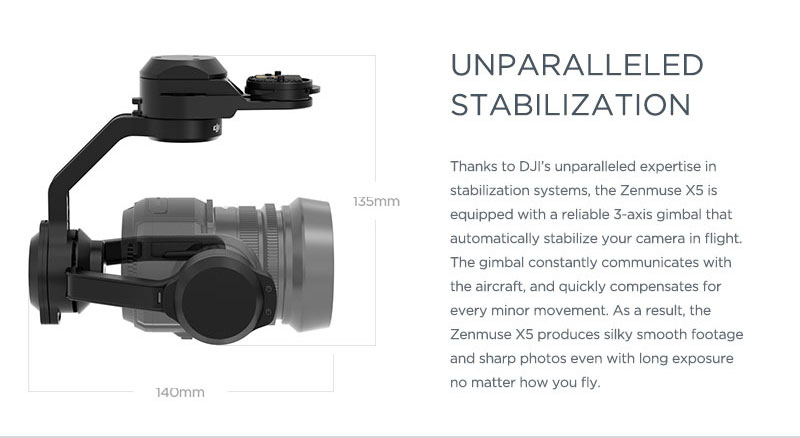 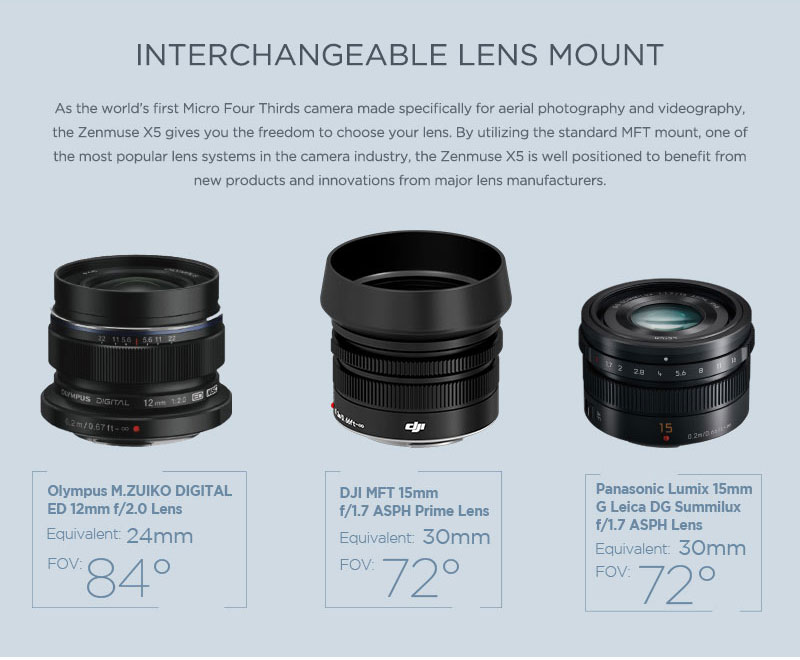 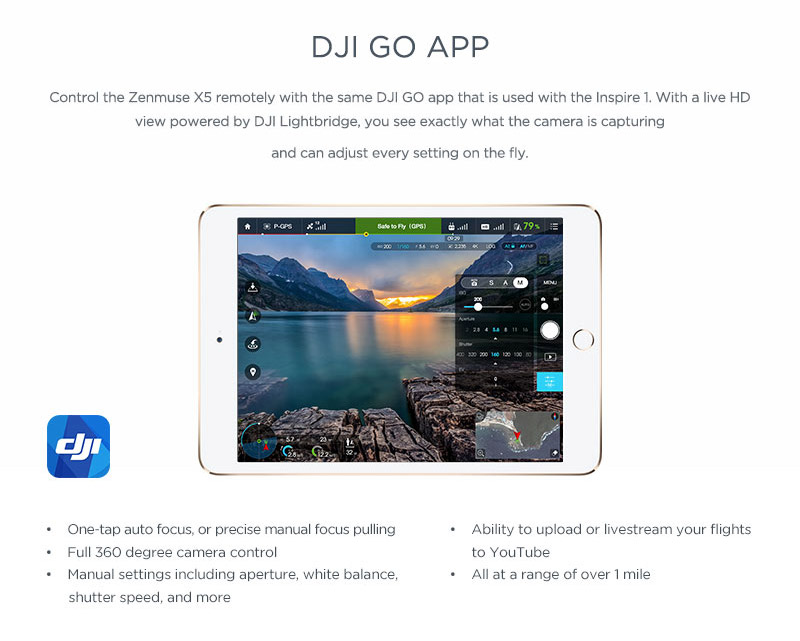 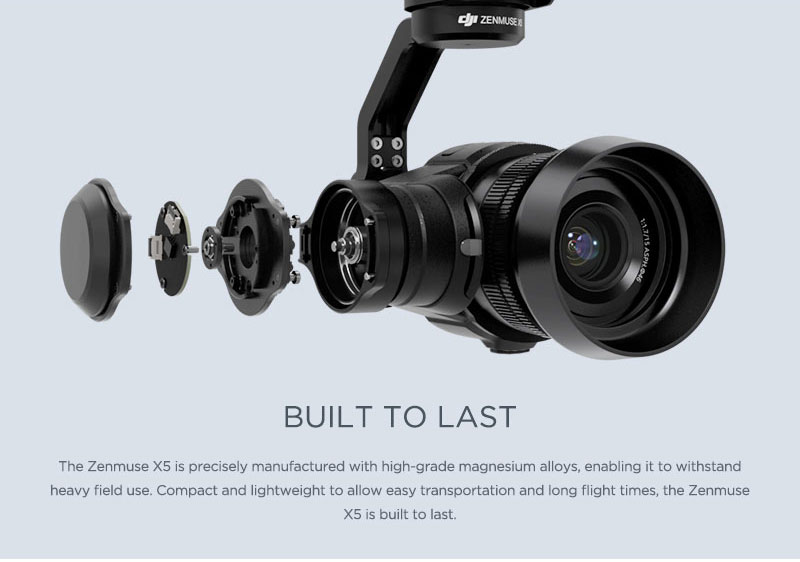 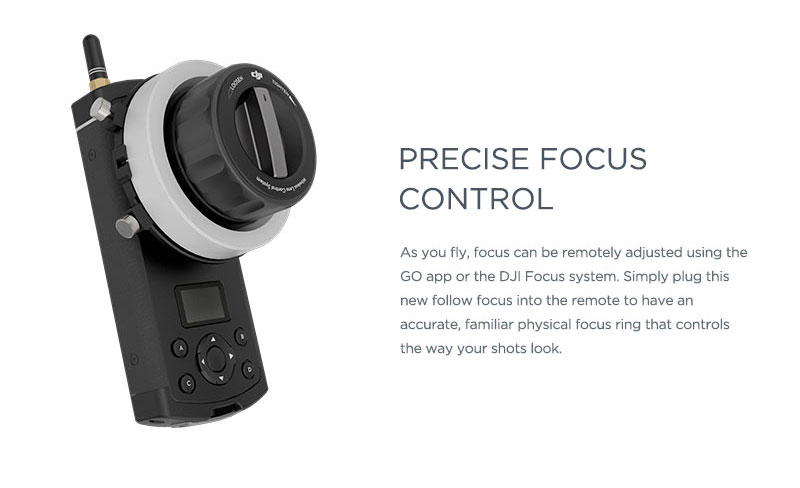 A Micro Four Thirds CMOS sensor with 4K image capture is introduced to DJI's quadcopter line with the Inspire 1 PROfeaturing the Zenmuse X5 camera and gimbal system along with a 15mm f/1.7 lens. Forgoing the fixed landing gear design found on many earlier quadcopters, the Inspire 1 features a retractable arm system whereby the underside of each prop motor has a foot to act as a landing pod when the arms are lowered. In-flight, the arms lift up to provide the camera an unobstructed 360-degree view. A 3-axis gimbal keeps shots steady and the camera pointed the same direction as the quadcopter banks and turns. The camera records internally to microSDHC/SDXC memory cards and can also beam a live 720p feed to a mobile device running the DJI GO app or a monitor or FPV glasses with an HDMI input. One transmitter (radio controller) is included and a second can be added so that one operator can pilot and another can pan and tilt the camera.

As with many other multi-rotor systems, the Inspire 1 relies on a GPS-based stabilization system that - thanks to spatial awareness - is able to hold a position even when experiencing wind interference, can compensate for overzealous pilot inputs to help avoid stalling, automatically brings the aircraft home in the event of signal loss or at the press of a button, and makes possible a number of semi-automated flight modes that can be enabled through the app. There is also an "indoor" mode which relies on Vision Position technology - combining optical flow with ultrasonics - to provide stability indoors or in other contexts where GPS is unavailable (Note: certain features will be unavailable in indoor mode).

What Ready-to-Fly MeansThis Inspire 1 bundle comes ready-to-fly (RTF). This means a pre-bound transmitter (radio controller) is included and that no major assembly is required – in particular, no assembly that requires soldering. It is important – as with any multi-rotor – to follow the user guide to ensure proper calibration before embarking on your first flight

Micro Four Thirds Sensor with MFT MountSporting a Micro Four Thirds CMOS sensor, the Inspire 1 PRO introduces mirrorless camera performance to the Inspire series. The featuring a standard MFT mount, the Zenmuse X5 camera includes the Panasonic Lumix 15mm f/1.7 lens, and also works with the separately available Olympus M. ED 12mm f/2.0 lens4K and HD Video CaptureThe Zenmuse X5 is able to capture video at up to DCI 4K 4096 x 2160 at 23.98p or UHD 4K at 29.97p16MP Stills CapabilityNot just for video, the Zenmuse X5 can snap still from the air at up to 16MP resolution. In addition to single-shot, the camera support busts of 3, 5, or 7 frames and can take time-lapse at stepped intervals of between three and 60 seconds3-Axis GimbalThe Zenmuse X5 camera is mounted via an integrated 3-axis gimbal which uses brushless servo motors to keep the shot stable and the horizon level. The camera pans a full 360-degrees so that no matter which way the quadcopter turns, the camera can remain locked on the subject. Manual panning and tilting can be affected using controls on the transmitterLive HD ViewA real-time feed from the Zenmuse X5 camera can be displayed in 720p HD on a mobile device or HDMI monitor, making this it a great choice for FPV (first-person view) flying as well as enabling videographers and photographers to monitor framing from the ground. This is made possible by the inclusion of the DJI Lightbridge system within the flight electronics, which features a range of up to 1.2 miles

For connecting an FPV monitor or glasses there is an HDMI port on the transmitter. Plus there is a USB port to keep you mobile device's battery topped up. And included mount allows you to attach a smartphone or tablet directly to the transmitterModular Gimbal and CameraThe Zenmuse X5 gimbal and camera assembly can be removed from the Inspire 1 for safe transport and future upgrades

Retractable Carbon Fiber ArmsThe prop arms rest in a lowered position when the Inspire is on the ground, acting as landing gear. Once in the air, they can be retracted to give the camera unobstructed views across 360-degrees. Carbon fiber is used in the construction because of its high strength to weight ratioAerodynamic DesignNot only does it give the Inspire 1 a sleek look, the aerodynamic airframe helps reduce resistance for better performance and increased battery life

Fly Indoors and Without GPSDJI's Optical Flow technology uses a specially designed camera as well as sonic waves to provide the same stability function indoors as GPS does outdoors. This technology allows the Inspire to hold its location, stop when the controls are released, and quickly respond to pilot commands even when GPS is unavailableApp-Based Control SoftwareEverything from manual camera controls to flight telemetry – even auto takeoff and landing – can be accessed via the Inspire 1 Mobile app. It is also possible to create autopilot courses using waypoints, just as you would on the DJI iPad Ground Station System

Note: The tablet must be connected to the transmitter via USB, and to use the waypoint map an Internet connection is requiredManual ModeChange all of your camera settings, including ISO, White Balance, Exposure, and more on the fly ensuring every shot looks exactly the way you wantLive Map and RadarSee precisely where your Inspire 1 is at all times on the live map. The map can be enlarged when needed, and shows your most recent flight pathDynamic Home PointWhen GPS signal is available on the transmitter (remote control), the Home Point automatically refreshes. This becomes useful while traveling in a car or on a boat allowing the return-to-home point to move where the operator goes. Multiple configurations are available via the Dynamic Home Point functionAuto-Takeoff and LandingTakeoff and landing are available with just a tap. Tap once to takeoff and your Inspire 1 will hover and transform, ready to start filming. Then tap again to make it transform into landing mode and auto landTransmitter CustomizationPut yourself in charge by tailoring the Inspire 1's controls to your personal needs. This way, your Inspire 1 moves and responds in ways you're most comfortable with

Take control of your Inspire 1 in the air with a dedicated transmitter (radio controller) designed specifically for it. Operating on 2.4 GHz, it features dedicated buttons for photo and video capture, a gimbal control dial, and more. It includes an integrated 6000mAh rechargeable batteryUse Two TransmittersFor an even greater level of precision, use a second transmitter and fly with a friend. With two people controlling the same quadcopter, one person pilots the flight path while the other aims the gimbal and camera. Each user can have their own screen to see exactly what is being shot in real-time

Smart Power ManagementThe flight battery constantly supplies the flight computer with remaining voltage. Using special algorithms the computer supplies the pilot with estimates of remaining flying distance and time to return homeAutomated ChargingThe battery tracks the voltage of each cell, the total number of charges and discharges, and the overall health and battery status